It probably tells the reader quite a bit about me to say that the image above makes me happy on so many levels.

I’ve made work in the past that was intended to be displayed under both black light and with no light (by utilizing photo-phosphorescent paint).

The study in the gallery above (the first of several*) is a recent continuation, or, at least, a related body of work. I’m working with adding paint on glass to create a layer of physical separation and also layering the different paints to see how they mix optically. I’ll probably use my updates to document progress.

An implied light source is important to understand the illusion in a painting, even in the case of an un-natural, fictitious space or place. I like the contradiction/duality of the work also appearing to be a source of light, in addition to the duality of having more than one appearance or set of visual characteristics, given a difference lighting. Plus, the need to change lighting requires participation, emphasizing the experiential element of seeing art; and, the additional duality that black-light art is not typically “high art” gives a gentle entry point for more audiences (I’m totally good with “that’s cool” from the non-art crowd).

*if you want to see others, sign up for this blog- I do post a lot about other artists, but I give updates on my own practice every other week as well.

I’ve mentioned that I’m looking at new directions to take my painting, and despite having a couple of pieces underway that aren’t clean breaks, I definitely see this small series as a big step away from some aspects of work from the last two years to refocus on line and color (with much less emphasis on surface and implied space).

Actually began this piece a couple of months ago and have been remiss to get a post up about it. My practice does tend to be quite traditional- sketches lead to studies lead to pieces that lead towards the next direction to follow- and this one is no different. In part it’s taking in some of the lessons from a larger piece I did last year, and is directionally steered from the study at the top left. 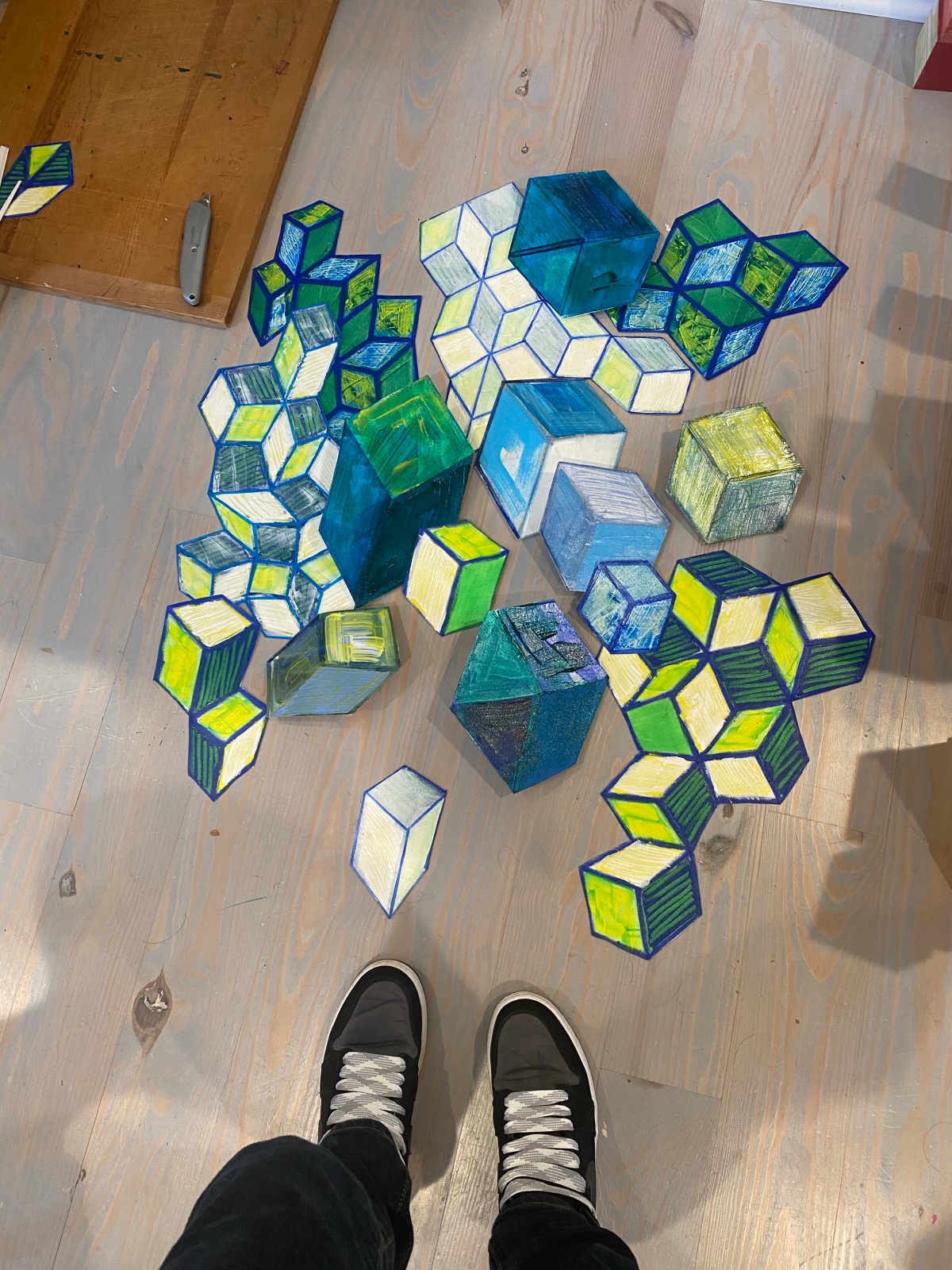 All of the works below are created by disassembling and re-“mixing” cubes from previously completed paintings. I call them remixes for several reasons- they are re-assemblies of components of prior work, which are always re-assembled differently, and the word or phrase “re-mix” is a reference to its use in the world of popular music where it refers to a re-visiting of the hook from a song (not to be confused with a “mash up” which is a remix of more than one song, but I digress).

The main image for this post is illustrative of how these works take shape. The cubes, whether individual or sections/groups, are then mounted to foam core or illustration board, then reassembled on the wall after they are composed on the floor. They are mounted by “pinning” the cubes to the wall via a cut nail- the flat edges of the cut nails keep them from turning once installed.

Beyond the obvious relationship to working with the physical cubes, and despite the fact that they are being presented as compositions, they seem to me to ground choice as prime in a way that my more conventional, rectangular-format paintings can’t (not that this difference makes these stronger, just… different). To me, the act of intuitive “play” without a known objective is what makes much formalist abstract art, well, non-objective. Here are some of the original takes…

I made all of the above in late 2020 and early 2021. I was intrigued by the way overlapping cubes which were, in terms of application, distinct implied that they co-existed in some other, shared space which is not defined compositionally, in fact, the opposite (referring here to the white of the wall). I did think of the work above as finished pieces at the time, rather than a project, or as site-specific installation art. I think the appeal of these has a lot to do with my on-going interest in the aesthetics of cellular animation, and how the visual “snap” that stacking of image layers to create space is unique.

More recently (during the last half of 2021), as the work with the cubes took shape more clearly, I began re-thinking these remixes should be re-mixed (so, expect future iterations to incorporate the same elements, but in new configurations).