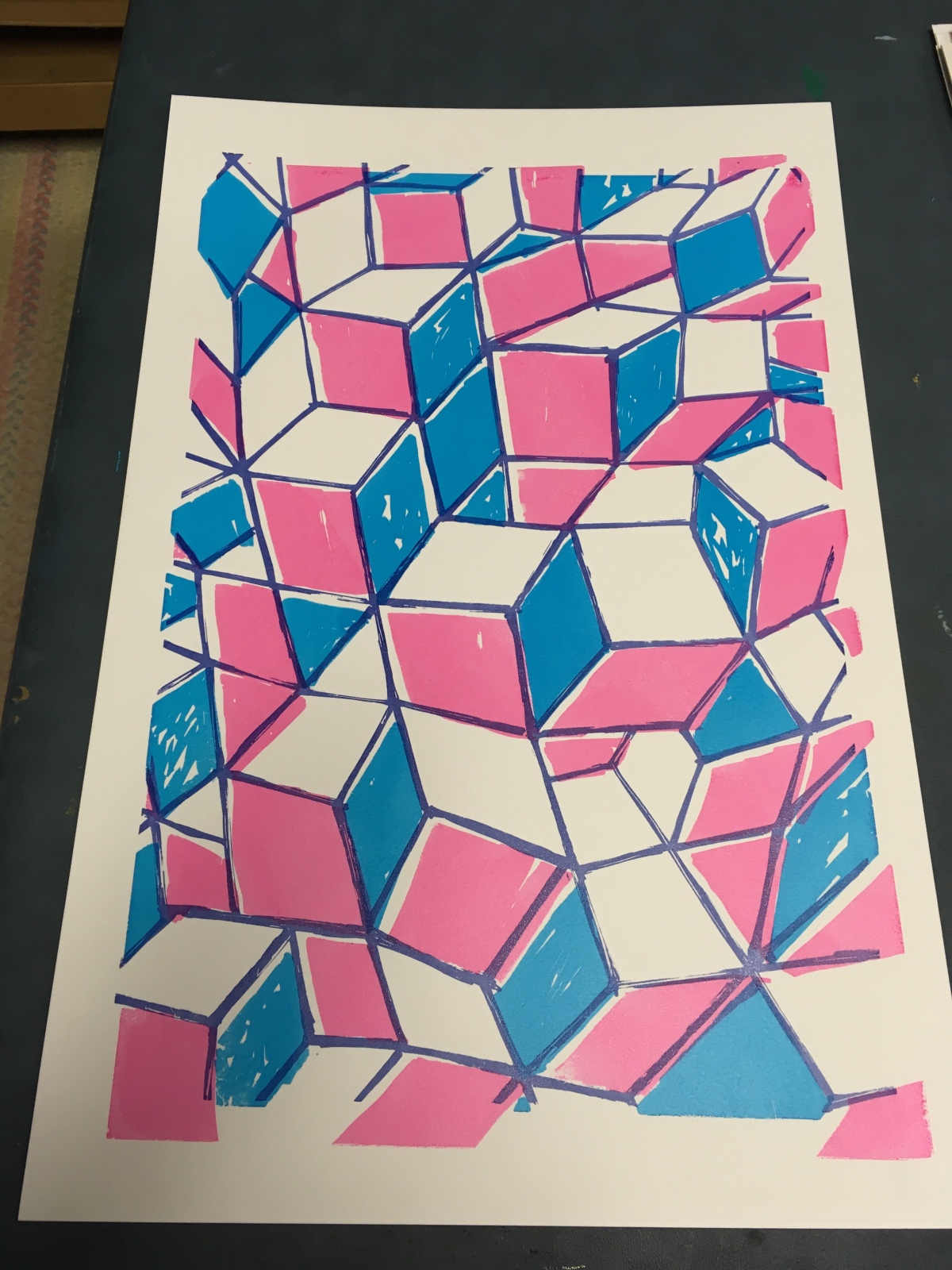 Glad to finally get some screens pulled after starting this project last December! Very pleased with the results on a lot of levels- not only composition and color choice, but the acrylic has the slightest sheen on the paper which is very pleasing. I ended up using acrylic paint (since that’s more familiar to me than Speedball inks) and mixed about 1:10 with gloss acrylic gel medium. The gel medium gives the paint a ton of translucence which looks really cool in several places. I went with a pthalo green instead of ultramarine to give more pop against the napthol crimson red- it makes the purple a little more grey but that actually worked just fine as a trap color.

The other thing I loved about these was that no computer was used at any point. The original drawing was done on paper (and has been re-used) and the template for each of the three screens were made using layers of acetate onto which I traced each color with an opaque paint marker. I intentionally traced somewhat loosely and am so stoked with the way that impacted the final prints.

I wish I had gotten some pictures of putting the photo emulsion on the screens and doing the exposures- next time (definitely doing this again). 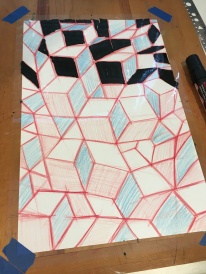 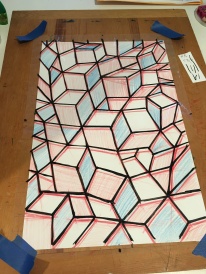 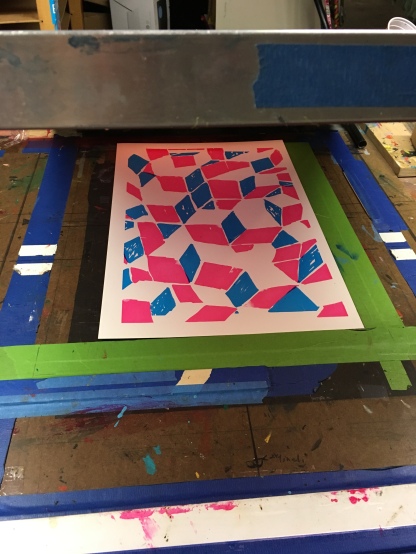 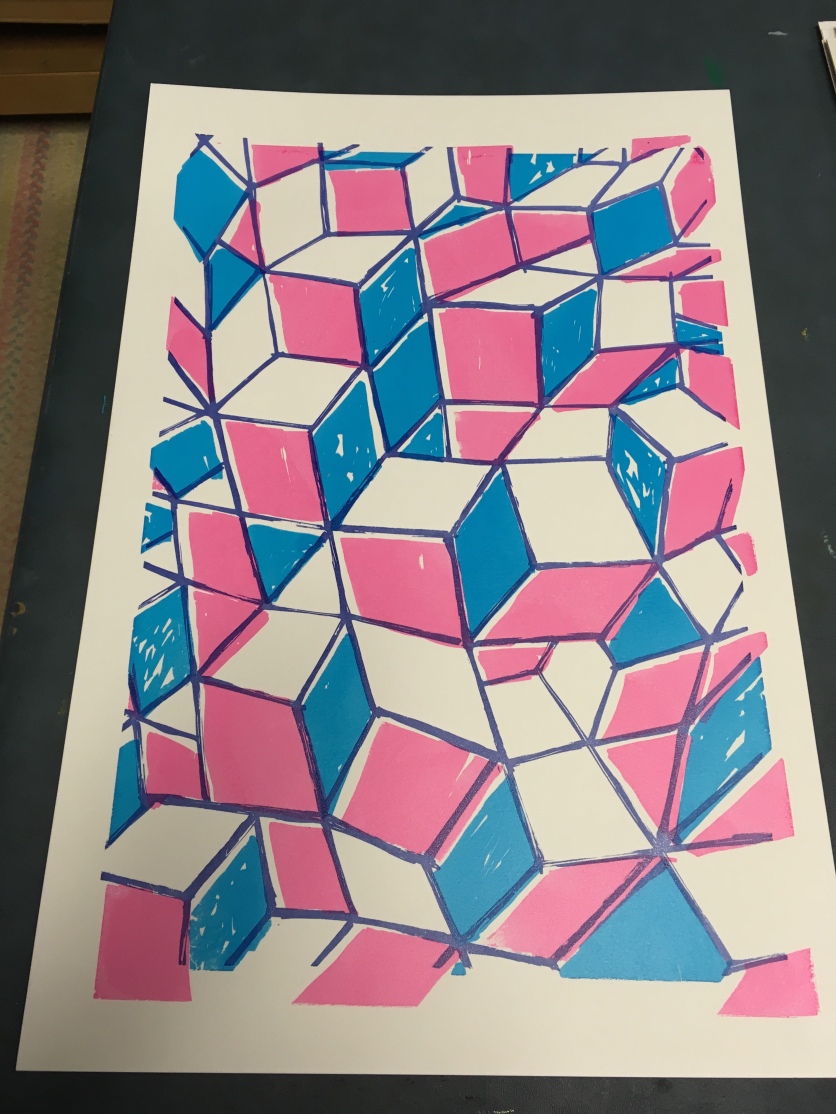 I will do an update post once we get to printing… So! I’ve had an interest in finding ways to capture a composition and use the process of copying it to create even more works, both as a strategy to create layers of media for a drawing through the process of drawing itself, and also/primarily out of a desire to make more, lower cost images for sale through non-gallery channels. Then I found out my neighbor has a set-up for doing runs of screens and I decided it was time to take this interest to the next level. I’ve never done any print-making and I am very psyched to see what results we get.

I first created a drawing on paper, and added some shading to begin fleshing out the dimensional quality of the cubes/space. I then began created the actual “negatives” which we will expose to create each screen by setting registration marks, taping down a layer of acetate over the drawing, and tracing the color for each screen

My interest in making some serigraphs (screen prints) specifically goes back a while- Albers was an early fav of mine, although it was only after undergrad that I seriously studied his work on color (I also made a series of paintings when I lived in Houston that I put in a show called “Blips” that were open nods to Albers and Richard Anuszkiewicz). 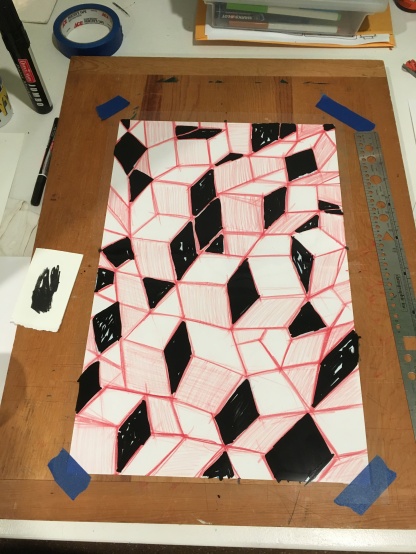 Screen prints by others that I like with captions…

Josef Albers. Homage to the Square. 1962