I’ve written, and talk, about the act of making choices- reacting to what happened previously- as a subject of my work. It’s occurred to me that this can include taking parts of a composition that I like the most and doing something new them.

The first image below was the original study to see what that approach might look like if I considered these selections to be distinct works, and also re-explore some notions I’ve had that edge of a rectangular canvas can be somewhat arbitrary for this compositional strategy. The middle piece is my first attempt at mounting one on panel, suspended off the wall to create shadows of the object that also relate to the cubes themselves. 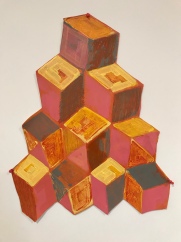 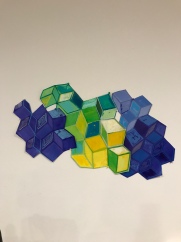